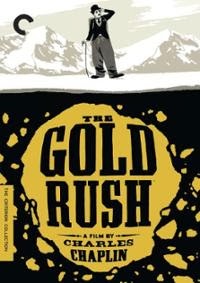 Serendipity is a cool thing some times. I remember watching The Gold Rush one night on PBS in the late 1970's. It had the most god awful musical score so I turned off the sound and flipped on the radio to hear Foreigner’s Cold As Ice during one of blizzard scenes. The story is aprespos of nothing, but it’s just a memory of watching the film.

The film has Chaplin’s tramp heading to Alaska to take part in the gold rush. As he struggles to make a fortune he finds love, friends battles the elements,  and makes his food dance.

As a complete feature film The Gold Rush is probably the pinnacle of Chaplin’s achievement. Here is the point at which his story telling and his love of set pieces came together to form a seamless whole. I say this because to me Chaplin was always a master of the gag or set piece but rarely of the complete film.  I find that I remember the bits of the features more than I remember the whole thing. Yes, while almost all of his features work on some level (I would argue that Limelight is the one glaring disaster), very few of them work a unified whole with the result you don't remember the whole so much as the set pieces.

While I count my self as someone who is a fan of Chaplin’s work  as well as a critic of some of his quaint turns, I find The Gold Rush to be the point at which Chaplin makes a modern movie. What I mean by this is that this is the point where he moved away from the conventions of  his gag driven silent shorts and into what we consider feature films. To be sure the film is a series of connected set pieces, but until you've seen the film a couple of dozen times you won't notice that. Largely this is just the story of the Tramp and the people he comes in contact with.

To be honest this film is hard to write up. I've been trying literally for months to finish this piece but I've been unable to come up with anything. The trouble is the film has been written about for so long by so many people that there isn't anything I can really say about it. Anything I say isn't going to seem original but parroting what was said before. I think that the best thing I can do is say the movie is very funny, quite touching and if you've never seen it you should make the effort- especially in the Criterion double disc which has two cuts of the film plus assorted goodies.