I attended the second New York Film Critics Series screening (the first was last months screening of Nebraska). The idea is that at a preview screening of a film they will do a live Q&A with the directors/actors ect that is hooked up to theaters around the country.

Before the movie Peter Travers of Rolling Stone came out and did a brief intro. We then saw the movie which was followed by a Q&A with the director of American Hustle David O Russell.

The film itself is very good and very funny. Based on the ABSCAM scandal from the late 70's the film tells the story of Irving Rosenfeld (Christian Bale) who along with Amy Adam's Sydney Prosser get caught by FBI man  Bradley Cooper running a scam. They cut a deal to help catch some low level crooks but soon it balloons into catching politicians and mobsters.

The film is not the straight truth but based upon what happened since director Russell rejiggered the film to concentrate on the characters and not so much on the events. The events are what put everyone into orbit around each other.

I'm not going to do a full review. Yes it's a good film, yes you should see it. Yes you will like it but the film is going to be in the running for the Oscars and is going to get a huge push and anything I might say isn't going to make a difference. 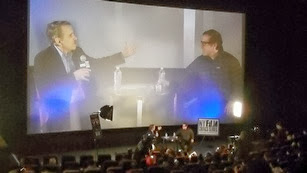 I do want to say a couple of quick things about the film:

First look for Jennifer Lawrence to be in the running for another Oscar. I didn't recognize her, despite knowing the role she plays. Yea she's that good.

The use of music in the film is incredible. I love that several time Russell uses what seems to be the perfect 70's song as background- only to have things flip the audience as we see the characters singing along.

There are several sequences that are near perfectly realized set pieces- most notably the music ones- however there are several others- just don't ask me what they are I stopped taking notes after a while.

Seriously this is a film you'll want to run out and see.

After the screening we got the Q&A.

I'm going to take a pass on reviewing the event as something needing to be reviewed. There were problems, the lights blew, the Skype connection to Seattle went  and at a certain point David O Russell refused to use the microphone despite being told that was working as far as the broadcast was going. While we in New York heard him I have no idea how this played elsewhere. It was a great talk marred by some glitches

As an idea the idea of interactive Q&As with audiences around the country is cool, especially when you can get some like David O Russell to talk (What I could hear was good), however since so  much went wrong today it's unfair to say more than I'm hopeful that they'll get the bugs out and make a go of it. In all honesty I'm impressed enough that when the series returns  Tuesday January 21st with At Middleton I'm going to go to my local theater to see it when it all works right.

For more pictures from inside the theater check our Tumblr page 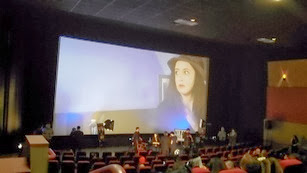