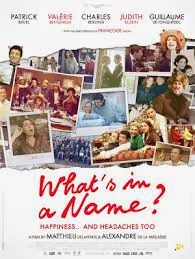 Opening tomorrow in select theaters and on VOD is the French chamber comedy What's in a Name? It's very funny comedy that I need again .

The film is what happens when at a dinner party with friends and family, Vincent announces to the assembled group what the name of his soon to be delivered baby boy is going to be. The group is horrified and the resulting arguments lay waste to everyone in the room as good natured banter and kidding turns more serious as the name acts as a trigger for spewing venom..

Very much a kin to Yasmina Reza's funny play God of Carnage which Roman Polanski turned into the weak Carnage with Jody Foster, the film is the peeling back of civility and emotions as a prelude to dinner. While there are similarities in basic story, What's in a Name is infinitely better than the Polanski film.

I really like the film a great deal and laughed all through. It is an absolute delight for anyone who likes well written witty exchanges. However I'm finding I can't really review the film except to say go see it for one simple reason- the dialog comes along so fast and furious. While I know I got everything said, I was too busy reading the subtitles to fully engage with the film- this isn't a problem as such- hell it means I have a great excuse to see the film again (and I will several more times) , it just means that having only had one pass on the film I can't full write up the film because I know I didn't grasp everything- or more importantly laugh near as much as I should have.

My advice is simply go see the film and enjoy yourself.

The film opens tomorrow in select theaters including New York's Cinema Village and it also is available at iTunes and VOD. To get it at iTunes go here.
Posted by Steve Kopian at December 12, 2013