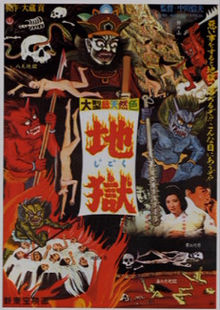 I had read about and seen stills from this movie for years. I had heard how freaky and bloody and scary this movie's vision of hell was, but I never got a chance to actually see it. Finally I was able to secure a copy and I sat down to watch the horror.

For the first hour of this film we watch as our hero lives a life that is more or less a living hell. More horrible, terrible things befall him and those around him than anyone outside of a soap opera has a right to expect. Very act is bound to damn someone to hell and it isn't long before our guilt ridden hero crosses over and experiences what true torment is. Its enough to make you want to laugh were it not played so painfully straight.

What we see once we get to Hell itself looks great. Even some 40 years after it first marched across theater some of the shots of flayed flesh and disemboweled intestines are still shocking. The cramped and dark vistas are something out of a nightmare. Many tormented images you'd almost be proud to have on your walls.

Is it scary a bit but its not the be all and end all that some had made it out to be. Then again the films images have been raided by others so it less shocking. I also find that some of the pacing is off and what may have once worked now borders on tedious.

The film seems to be saying that all life, here or in the next world is miserable hellish and that no matter what we do we're doomed simply to suffer. A happy little film if there ever was one.

I like the film but far from love it. The first part is very soapy and over blown, while the second is almost a catalog of horrors. I give it points for trying but I don't think it completely works.

A coin toss. It really depends on what you're looking for. If you're looking, for gore and guts, its here but not enough to make you walk away happy. Are you looking for a meditation on sin, guilt and existence, you may like it, especially if you can get past the soap. If you want to see a technically well made film that doesn't quite work but influenced later films and which will provide some discussion over dinner, then try it.