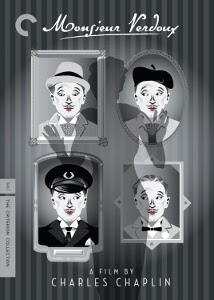 I’m not going to lie, Where most, if not all of the films I’ve been reviewing this month I own, I don’t have Monsieur Verdoux…well I don’t have it from Criterion. I do own it as part of an import set of Chaplin films. I have seen the film a couple of times but other than the first time, I’ve only seen it when I happen upon it. I don’t put it on as something I want to watch.

This isn’t to say that the film is bad, it’s not, it’s just it doesn’t blow up my skirt.

The film is the story of a Bluebeard sort of fellow who marries and murders women in order to get enough money to support his real family. Chaplin plays the Bluebeard and he manages to make the man’s plight heartbreaking. The role, which is a radical change of pace for Chaplin, is in some ways one of his better roles because it requires him to do more than his typical schicht. I think it was also a small part of the reason the film tanked at the box office, audiences were not willing to accept him as anything other than the Tramp.

The script which was written by Orson Welles and tweaked by Chaplin, is a good one. It resulted in one of the tighter features that Chaplin made. I’m guessing this is the result of Welles being more interested in making a whole film where Chaplin throughout his entire career was a man who ultimately simply linked gags and moments and rarely told a complete story. (An aside Welles was to direct the film but Chaplin got spooked at being directed by someone else so he took over the project).

At the same time the film is still is probably best remembered for two bits- the entire Martha Raye sequence which in many people’s eyes is the highlight of her career and for Chaplin’s final speech before being lead off the gallows. The speech is a cutting indictment of criminal justice much as the end of the Great Dictator is a cry for peace. And unfortunately all I remember about the film are those two bits, which is why I never go back to the film.

As I said the film isn’t bad, and every time I run across it, on something like Turner Classic Movies I’ll stop and watch it and think, gee this is better than I thought it was, only to have the film end and then feel that I never need see the film again and that the only two worthwhile parts are Raye and the speech…until I of course run across the film again only to feel it’s better than I give it credit for.

So where does this leave the film?

It leaves it in the pile of films you really ought to see especially if all you know of Chaplin is the Tramp.

While I am not a fan of the film, I won’t be picking up the Criterion DVD despite the extras, I do think it’s a pretty good film, even if I keep thinking its not as good as I keep realizing it is.

Rent it or stream it or give it a go when you see it on cable.
Posted by Steve Kopian at December 23, 2013