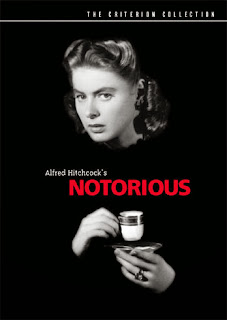 I am not Hitchcock fan as such. I like some of his films, don’t care for others. I like films like Psycho, Frenzy, and The Lady Vanishes while I love To Catch a Thief, Foreign Correspondent, Saboteur (until its abrupt end) and of course Notorious. Notorious is one of the most complex films in all of Hitchcock’s body of work as well as one of the most subversive films to come out of Hollywood at the time it was made.

The film has secret agent Cary Grant using former lover Ingrid Bergman to find out about of runaway Nazi’s in South America. He convinces her to marry Claude Raines in the hope of finding out what they are doing with some uranium. Of course Grant and Bergman still have the hots for each other and some of the Nazi’s (Raines protective mother included) suspect something is up, but the game is afoot Hitchcock is controlling the pieces.

While on the surface the film is a great little thriller the film has a great deal going on below the surface- chief amongst it is the use of sex for both pleasure and as a weapon. Few films in Hollywood were so blatantly sexual- how could the Hayes Office not catch on as to what was going on.

The easiest thing to see where the sex is being used is the sequence where Grant and Bergman kiss each other for several minutes. The rule in Hollywood was that no kiss could last past a certain length of time. Hitchcock went way beyond that by have the pair carry on a conversation in between kisses. Hitchcock understood that no one kisses and holds it for any length of time, instead people kiss and talk and look and kiss and look and kiss… By breaking up the kiss he made a sequence that played much realer and much sexier than had they just kissed.

The films interrelationships are much more complex than we normally see in films of the time. First off the relationship between Raines and his mother is really weird. There is something just wrong about it. You see why Hitchcock drifted toward Robert Bloch’s Psycho.

As for the Grant/Bergman relationship this too is messed up. Grant is clearly a scumbag that is loved by Bergman. He send her pretty much forcibly (ie. prostitutes her)to be the wife of Raines. There is a whole twisted sexual element going on between the two. Yea there is romance, but there are other levels that cross over into abuse. Once I had it pointed out to me it’s very hard to ever not see it after that. I keep trying to work out what the back story between the two is- and what their future might be.

Actually I keep revisiting the film again and again (in a really cool out of print Criterion edition) partly because it’s a good film, but also because I want to work out what is going on past the edges of the frame. Stuff is going on and I want to see if there are clues….

On the other hand you don’t have to do that because even on the face of it the film is taut romantic thriller and one of the best films Hitchcock ever made so just make some popcorn get a copy of the film and settle in for a good night on the couch
Posted by Steve Kopian at December 18, 2013