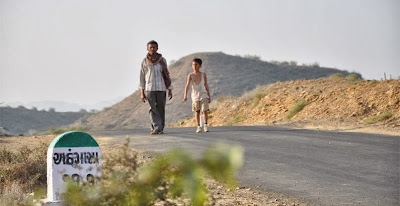 Tomorrow night's closing night film at the South Asian International Film festival is the Oscar contender from India The Good Road. I'm not sure it will win the Oscar, I think other films will have more vocal champions, but I can't complain with the choice and will be perfectly happy if  it makes the final cut.

The Good Road  is a dual story of a young boy who accidentally gets separated from his parents along a stretch of road who then fall in with a couple of truckers working on the fringes of the law. The film also follows a young girl traveling alone along the same stretch of road who ends up in brothel and has to decide whether to stay or continue on her way to her grandmother's house.

Like many of the films at the South Asian International Film Festival this a great looking film. I love when a film takes you to another place and this film does that in spades. One can almost feel the heat of the lonely stretches of road bleeding off the screen. I can't imagine what this will look on a big screen, but I know that I'm going to be jealous of anyone who manages to see this at the SVA Theater tomorrow night.

The two stories are quite good. Filled with wonderful characters this a film that could survive on the performances alone. Luckily the actors have been blessed with a great script that really puts us in these places with these people.

I want very much to wax poetic about the film, but I'm going to refrain from doing so- at least for the moment. My reluctance for doing so is not because I don't have anything to say, rather I'd like you all to make the effort to see the film. I say this because occasionally occasionally I run across a great little film that is best just seen. Why should I tell you all about a journey that you should be taking on your own? If you want to discuss the film see it first and then come back and leave a comment and I'll respond. Instead of talking about it I'll just say go to the SVA theater tomorrow and see the film yourselves. See the film and its wonders for yourself.

A real treat and one of the better films at this year's festival.
Posted by Steve Kopian at December 07, 2013