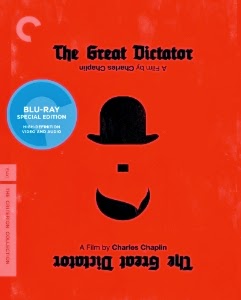 Not long after Chaplin died in 1977 his film The Great Dictator and Modern Times were released to a lot of theaters to cash in on his passing. While that might seem a bit odd today (locally it would probably only play in Manhattan) that was the way things were done back then. I was lucky enough to see them.

The Great Dictator was Chaplin’s first film with dialog. It was also Chaplin taking on Hitler and the madness in Germany at the start of WW2. Chaplin’s tamp has become a Jewish Barber. Chaplin also plays Hynkel the leader of Tomania who is the double of the barber. How their lives intersect is the film.

One of the best of Chaplin’s films The Great Dictator is a kick in the ass. One the few times where Chaplin managed to get his features to work from start to finish the film. It’s funny touching drama that looks at a war exploding into madness. Imagine if you will one of the really good wartime dramas with the Chaplin walking through it. Its in its way a cozy classic film of the sort they don’t make any more…but son’t let that fool you, The Great Dictator is a great film. Sure you may think it may have dated but it hasn’t.

For me the film will forever be tied up with another war entirely. Back during the first gulf war, The Great Dictator was playing on the then commercial free purely movie station AMC (now home to Breaking Bad, Walking Dead and Mad Men). The film was running at the moment that Bagdad was being bombed for the first time. As the world seemed to go insane once again the final sequence where the Tailor, having replaced the evil Hynkel makes a speech pleading for peace. Switching between the sight of planes bombing a city a city and Chaplin’s 50 year old plea for peace I found I was deeply moved. For the first time I realized, really realized the cost of war…and I was horrified because it was clear that some things never change.

You owe it to yourself to see this film.
Posted by Steve Kopian at December 24, 2013