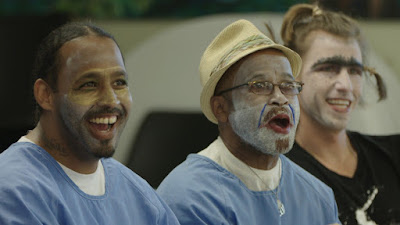 If you laugh for at least 45 seconds you will release enough endorphins that it will change the way you feel. It is one of the exercises used by The Prison Project, a program administered by the L.A. theater troupe The Actors’ Gang to help prisoners in various California prisons in order to help them change their lives. 45 SECONDS OF LAUGHTER is also the title of Tim Robbins excellent documentary about the The Prison Project.

To be honest the last thing I wanted to see at the New York Film festival was another film about a program to help prisoners change their lives. I say this after sitting through Lynn Novick‘s excellent COLLEGE BEHIND BARS, which I thought was the be all and end all on prison programs. As a result I delayed in watching 45 Seconds, which was a major mistake on my part...45SECONDS is simply great

An glorious observational film the camera watches the men in the program, which director Tim Robbins is part of as they go through various acting exercises and lessons preparing to perform a piece from the Commedia dell’arte. We watch as then men go from giving the lessons a shot to truly falling into them.

Thanks to Tim Robbin’s letting the sequences play out in extended takes we witness as genuine change happens. As a result we see how important these programs are and how, perhaps society is changing.

As good as the film is as documenting the program, the film transcends its simple story to be about something larger. In revealing the story of the inmates the film provides us with a way of changing the we see the world. What the men in the film are told about changing how they see and interact with the world can be used by those of us in the audience to make our lives better. Sure some of us may have a good world view but some of us don’t and this may help.

This is a great film. One of the must sees if the festival.

It’s so good that I can’t wait to see it again and ponder what’s in it.

The film plays today at the New York Film Festival today at 615 and Saturday at 12:15. For more information and tickets go here. 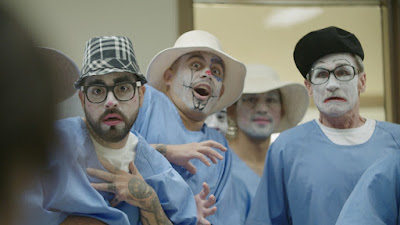