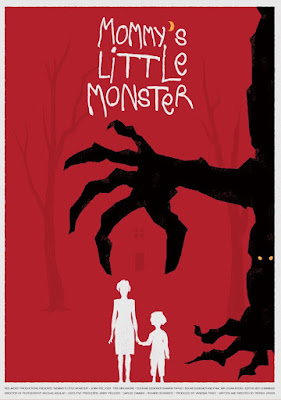 Writer director Patrick Green needs to be wapped upside his head. He's made a little confection called MOMMY'S LITTLE MONSTER that is difficult to really review without spoiling for a couple of reasons. Partly the difficulty is because how the film is being put out there (as a horror film) is not what the film is (it's something else, like most of the great horror films) and part of it is the fact that if I say too much it kind of gives it all away. As a result I want to wap Mr Green because he has thrown down the gauntlet and dared me to review it and I'm not so sure how.

The film is the story of what happens when a mother and her son flee into the country to get away from something. It isn't really clear what that thing is but we can assume it is probably a person since she is terrified of turning her cellphone on. What transpires is the film.

Nominal horror film is instead something else entirely. To be honest if you go into the film expecting a straight on horror film odds are you will end up being slightly disappointed. There is most certainly a monster, but it is not what you expect especially if you are waiting for something bug eyed.  The monster here is something (or is it somethings?) else and it is one that isn't so far from any of us.

Beautifully acted and often eerily shot MOMMY'S LITTLE MONSTER is great looking film. It looks and feels like a country set horror film which adds a great deal to the films punch. It is a lovely two-hander where the off screen characters fill out the spaces around those on screen.

Beyond that Ireally can't  say more other than MOMMY'S LITTLE MONSTER is a super little film. It's a wonderful piece of filmmaking with an "ah ha" moment and ending it earns. So long as you realize that Patrick Green is using the horror form to do more than just scare you are going to have a great time.

MOMMY'S LITTLE MONSTER has been playing at horror film fests all month long it will next appear at Horror Haus October 25-27. For more information and tickets go here
Posted by Steve Kopian at October 19, 2019