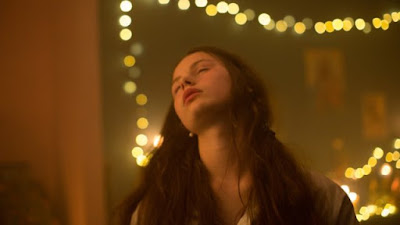 Normally I like Bertrand Bonello 's films but his ZOMBI CHILD is just an out right mess of a film. Forget that the film is not even remotely horrific until the final ten minutes, this is a film that has no clue as to what it is. (Not that I was really expecting a horror film, not on NYFF's Main Slate anyway)

The film tells two stories, that of a man who was turned into a zombie in Haiti in 1962, and eventually broke free from his captors and came  back to normal; and at the same time some girls, including his grand daughter, in an all girls school today.

If you're going into the film looking for a horror film, you'll be extremely disappointed until the final ten minutes. This is a largely a drama about, something, that morphs in the final bit into a horror film where the daughter of the zombie performs a voodoo ceremony for one of the girls. Then it turns scary before it just ends.

My saying that the film is about "something" is how I feel because frankly I have no clue what the point of this all is. Trust me, the film rambles from pillar to post for god know what reason The hand of the director can be seen moving cardboard cut outs-- er-- actors around.  There are no real characters, there are cut outs. I mean that, there is no back story, there are just single notes.

What a mess- more importantly what is this doing on the festival circuit?

ZOMBI CHILD plays today and tomorrow at the NYFF. For more information and tickets go here
Posted by Steve Kopian at October 01, 2019