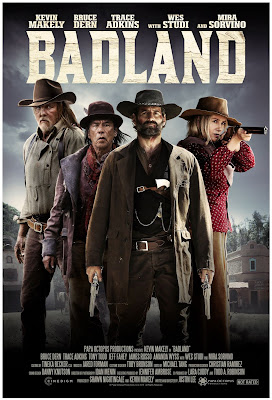 The highest praise I can give BADLANDS is that fifteen minutes into the film I wanted stop watching it and start again with my dad. I wanted him to see this meaty western drama, and had I not been watching the film at 11pm at night I would have reconvened watching it in the living room. However since it was late enough that my dad had retired for the evening and because I wanted to see how it came out I pressed on and had a good time on my own.

Badland is the story of Matthias Breecher, a Pinkerton detective sent to track down several notorious Confederate war criminals who fled west after the Civil War. In the course of tracking down the wanted men he has run ins with his frenemy Wes Studi. Another bounty hunter, as well as several women, one of which maybe a reason to stop his endless wandering.

This is a big meaty film plays more like a western novel than a typical Hollywood film. Broken into four chapters the film clearly has more on it’s mind than just telling a rip roaring tale. Notions of friendship, crime and punishment, forgiveness and moving on all play a role. The film fills it’s almost 2 hour run time with characters and drama and not just action. While Beecher's quest is what drives the film, the goal of the film is not just revenge or justice but things more human and more apropos to every day life. We are all not going to be tracking down killers, but we are all struggling with what is important in life.

I liked BADLANDS a great deal. Actually I liked it so much that I watched it again with my dad. (That’s high praise folks so go watch it.)
Posted by Steve Kopian at October 29, 2019