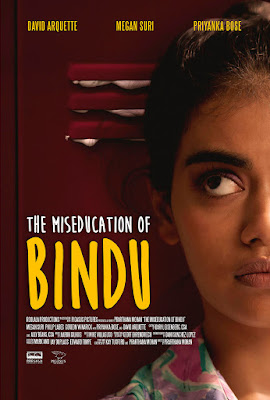 Produced by the Duplass Brothers THE MISEDUCATION OF BINDU is a charming little film about trying to fit in and just find your place in life.

Bindu has come to America with her mother to be with Bill her mother's boyfriend. She desperately wants to get the hell out of Dodge and needs simply to pass the Spanish proficiency test so she can move on. The trouble is she doesn't have the money to take the test and she has to find a way to finance it as well as dealing with boys and other distractions of high school.

Wonderfully off the beaten track BINDU is a super little gem. Blame it all on writer director Prarthana Mohan and co-writer Kay Tuxford who take what would have been a stereotypical story in the hands of anyone else and turned it into something special. And what I mean by this is not simply swapping out what would have been a white lead in any other film for a young woman from India, but creating characters that we really haven't seen before. In the the filmmaker statement's the women said that they wanted to put characters that were like themselves on screen and they have succeed in spades.

I love that even though the film kind of tracks in expected ways it still wanders all over the damn place bringing us a new way of seeing the world.  As someone who has become firmly entrenched in the inde scene over the last decade I have found that most inde films, despite being produced independently all have a similar mindset. They do things that are exactly the same, they are not independent. When I got an email about BINDU I was intrigued enough to look at the trailer. And despite being buried with New York Film Festival coverage I reached out and said I'd like to take a look. I'm glad I did.

Simply put THE MISEDUCATION OF BINDU is gem. It is a lovely little film that you haven't seen 1000 times before. It is highly recommended when it World Premeres at the Mill Valley Film Festival tomorrow and it plays at the Heartland FIlm Festival this weekend.