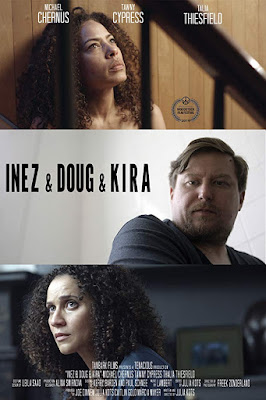 When Inez, Kira's twin sister suddenly commits suicide, Kira and her husband Doug are left to pick up the pieces. As the pair comb through Kira's life they have to deal with the complexity of their connections to each other.

Good drama about the mess left behind by suicide works best when dealing with the complex emotional issues found in our lives. There is is real weight to the discussion of addiction, recovery and the struggles most of us face mentally due either to illness or the slings and arrows of life. With in the complexities of life this film kicks serious butt to the point that I found myself  mumbling, "yes exactly" a couple of times.

The place where the film gets into trouble is with it plotting of the main story. While the twists and turns are amusing they are kind of pure soap opera. It's never bad, as such but it is a bit too neat.

Ultimately any plotting problems are negligible  thanks to the performances by Tawny Cypress, Talia Thiesfeild and Michael Chernus which are first rate. Also stunning is the dialog which is brilliantly crafted with some wonderful turns of phrase that I very much want to steal and use myself.

While not perfect the film still manages to hit home and numerous emotional buttons. It's a film I have no trouble recommending to anyone who either wants a thoughtful exploration of mental health issues or more importantly a good film for an evening out.