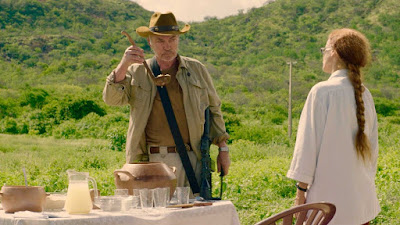 I honestly don’t know what I think of BACURAU. I say this because this film is so all over the place that my feelings are as well.

Set in the future the film concerns the titled town which is a tiny little town where everyone is like family. It’s a small town connected to a larger village some distance away but which is fiercely independent. They hate their condescending mayor who promises aide but gives them out dated food and just want him to handle the water situation- someone had dammed the river. One day they begin to lose phone service and the town somehow disappears off the map. What transpires is that some Americans have come to the area and are planning on killing everyone in the town for sport. It’s the Most Dangerous Game welded into the Magnificent Seven with deep message rattling around the hollow body.

Bloody, ugly, pointed , and having a huge chip on its shoulder this meandering unfocused film is too long by 40 minutes (why is this 130 minutes?). It wants to be all things to everyone. Its as if someone was told they were going to have one shot at making a movie and so they made every film they ever wanted to make as one movie. It’s a mess, interesting but still a mess. Comedy, blends with horror, which blends with social commentary and action. It bounces all over the place and I never knew what to feel. I don’t think the film’s efforts to give the film weight via long explanations by Udo Keir and his baddies really works. I know a couple of young writers sitting behind me found the whole thing, including the shooting of a child and the shooting of a school, hysterically funny (walking out behind them I heard their explanation as to why the film was a raucous comedy and why the shooting of an unarmed child was hysterical but I think they got it wrong).

For me this is an over thought out action film with flimsy justification for existing. It is most definitely a loud scream at those in power in Brazil and at the US in general, but it’s halfhearted in its approach. To me the film would be so much better with out the comedy and would have been more pointed if it was just a balls to the wall action film. The all over the place nature never made me connect- or rather only when the child walks into the dark. In the moments before he is killed we wonder if the film is going to be ballsy enough to kill the kid- it is.

Forgive me I’m scratching my head about this film. Why did it get an award at Cannes when there are so many better films? Instantly coming to mind is the Cambodian  film THE PREY which just played Fantasia and is heading to home video. It covers similar territory, though specifically Cambodia, but is still a balls to the wall thriller.

Ultimately while not a bad film, it is, in the words of Shakespeare “Sound and fury signifying nothing”.
Posted by Steve Kopian at October 05, 2019