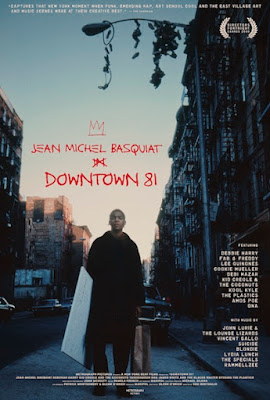 Downtown 81 is a kind of curate’s egg of a film. As a “movie” a cinematic entertainment with a compelling full fledged narrative, the film is a mixed affair. Rambling scenes are interspersed with musical sequences where a band say Kid Creole and the Coconuts or DNA plays either in concert or in a recording studio. Some people just show up in semi-throwaway roles Debbie Harry appears as a fairy godmother. Jean, our hero is more often than not on the outside of things, he and a friend discuss trying to get into the Kid Creole concert while the Kid plays inside. The scenes are pretty much all amusing but they don’t really add up to much in a conventional narrative sense….

…on the other hand the film is stunning portrait of a time, 1981, and a place, the lower East Side. This is what the city was like and this is the arts scene that spawned groups like Blondie and the others that float through the film. No other work of fiction that I’ve run across has portrayed the city in all its tarnished glory. Yes there have been documentaries, but no work of fiction has so beautifully blended the trash strewn reality with the hopeful exuberance of the arts scene. People like Basquiat and all the performers were going to change the world with their art- and they did – and here they all are in their stunning hopefulness. It’s an absolute blast to watch.

I had a ball watching this film. Sure the film is flawed, but there is so much wondrous life living around the problems that you really don’t care. This is a film about life springing up in an unexpected place, a life that not only took root in New York in 1981, but in this film and ended up rooted so deeply that that its heart is not only flowering in this film but in all of our everyday lives.

Assuming you can take it on its own terms and as a time capsule it is highly recommended
Posted by Steve Kopian at October 22, 2019