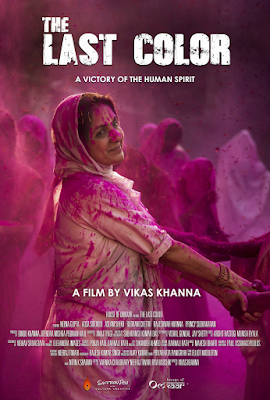 Chhoti is a young attorney wins the case of the widows who basically reduced to a living death where they are not allowed, according to tradition, to have any color in their lives. They want to be able to live life as they choose, and even partake in the Holi celebrations where colored powder is splashed around in celebration of the coming of spring. Taking news to the women she remembers back to her childhood when she made the acquaintance of  Noor, one such widow whose influence and friendship changed her life.

Stunningly beautiful, even in its occasional brutal scene, THE LAST COLOR is a visual stunner. Everything looks so spectacular that you really need to see this on a big screen where you can take in the visuals and truly get the sense of place. Honestly this is one of the best looking films I've seen in 2019 with several sequence and even more images burned into my brain.

That the film works as well as it does is due to the excellent cast. I don't think there is a bad performance anywhere in the film. However the whole film hinges on Neena Gupta as Noor and Aqsa Siddiqui as the young Chhoti. If you don't buy that they are deeply connected the whole film would collapse but they are spot on, and as a result form one of the great cinematic duos of the past decade or two. You can feel the love bleeding off the screen. The film is just okay but the film soars once the young Chhoti meets Noor. The bond between the pair is physical and when the young girl asks her friend if she can call her mother late in the proceedings there is a physical reaction in the audience that brings more than just a single tear.

The film while often playing like a heavy melodrama, is actually has a great deal on its mind It is a damning indictment of Indian society and the way tradition crushes the souls of the vast majority of people who are not male members of the patriarchy.Not only is the film dealing with the treatment of the widows the film also shows the ugliness faced by women in general, the homeless and transgender people.  It is a blow not only to the patriarchy but also by the police in general who are seen to be less than honorable in many cases.

This is a wonderful hidden gem that is worth your time and money.

THE LAST COLOR opens in theater in Los Angeles Friday.
Posted by Steve Kopian at October 21, 2019