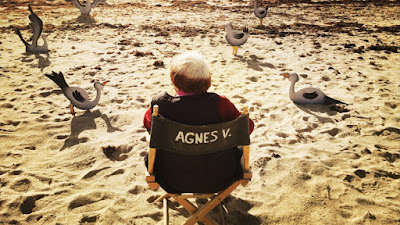 Agnes Varda’s final film is a bittersweet joy. A lovely explanation of a filmmaker and her entire body of work, it is a grand summing up a creative life. While it is glorious celebration of the world changing work of one person there is a sadness in that there will be no more wonders from Ms Varda.

According to Rosalie Varda, Anges’s daughter and collaborator the project was started in 2015 as a way to record the “masterclasses” that Agnes was holding around the world. Agnes hated the term masterclass, preferring the term conversation. She also didn’t like the way the straight recording of the conversations went and the project stalled as they pair tried to sort out a way to make the film work. Eventually bringing in collaborators the problem was solved and what we are left with is one part lecture, and several trips into the mind of Agnes’s mind.

Beginning as a lecture Varda by Agnes starts somewhere in the middle of Varda’s film work and then jumps around all over the place, not randomly but in what is a wonderful stream of consciousness that is exactly like what happens when you talk to a prolific filmmaker and artist and have the discussion of one thing lead into another. The discussion just seems to happen right before our eyes (despite Varda sometimes reading from notes) as if we are curled up in a beach chair next to her shooting the breeze.

Watching the film I was struck by how much I really need to go back and revisit her work. Partly because what Ms Varda says about the films, but mostly because seeing the clips I realized I have been neglecting some old friends. That’s what I love about the film, it not only reminds us of the wonders she produced but also gave us a key to discover new things I never saw in them before. It is, as Hubert Vigilla said to me when the film ended, a reminder of how many of her films I haven’t seen.

Odds are when the film ends you are going to be left feeling a bit strange. As good as this film is there is an odd feeling one gets when it fades to black (there are no end credits, its all at the start) in that it doesn’t feel like a bold final statement. This is a coda to a great life. The film feels a last coffee with a friend before they go off, it is not a final blow out (that would be FACES PLACES). As the film ended and I knew there was nothing new coming I felt totally content that Varda got to sum up. At the same time I wish that she had left with a flourish instead of a (literal) slow fade.

On the other hand when the project was started no one knew that this would be her last film. Additionally whatever she had to say she left in an almost seventy year long body of work, she owes nothing to anyone. In a weird way the film is like an old school Peter Gabriel concert when he would end with Biko and then walk off leaving the audience to pick up where he left off and carry on the fight.

My feelings at the end discounted, Varda By Agnes is a great film. It is the sort of film every artist would want as a final one- a taking stock of everything they had done which results in the realization that it is still vibrant and alive and informing art and culture even after their passing. (Perhaps this being the final work adds to its greatness)

Highly recommended, this film is a must for fans of Agnes Varda and film in general