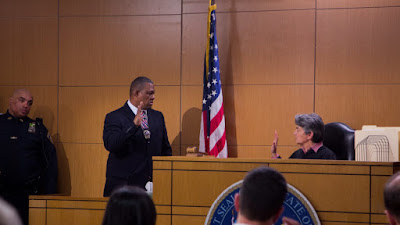 Unfairly getting lost in the final weekend of the New York Film Festival is AMERICAN TRIAL: THE ERIC GARNER STORY which very probably is the most important film playing at this years festival.

The film is a docufiction  trial of New York City Officer Pantaleo who wrestled Eric Garner to the ground using a choke hold when they he and several other officers tried to arrest him for selling loose cigarettes. Since Pantaleo was never indicted, so he never went to trial,  filmmaker Roee Messinger assembled a team of former prosecutors and a team of expert defense lawyers to use the public record and actual witnesses to put the officer on trial.  Pantaleo is portrayed by actor Anthony Altieri and his words are those found in the public record.

Allowing that some witnesses who would have been called to trial, (the man who shot the infamous video, the other officers, any other people on the street) AMERICAN TRIAL goes a long way to say that Pantaleo should have at least been indicted. The evidence is there to at least take the case to trial since its clear that within the definition of the NYPD department guidelines and the law what Pantaleo did was not allowed and probably strangulation under the criminal definition even if only for a matter of seconds. Watching the film, which was not scripted by simply the record of the mock trial the full extent of the miscarriage of justice can be seen.

Again in fairness to the fact that we do not get to see all the witnesses that we would have seen at trial, I will hold off saying that Pantaleo would have been convicted at trial, but he should have been indicted. All of the information needed for that is in the public record....

I should also point out that one of the strengths of the film is that it points out that there are things that most of us don't know such as the facts concerning what happened prior to the video such as a fight, not involving Garner (who according to testimony tried to break it up) that took place that brought the police and that ten minutes of unrecorded talk between the cops and Garner happened before the video began which makes it even more curious as to why things suddenly escalated. A full accounting of what happened makes clear at what a tragedy this was.

In fairness I do need to quibble about one or to choices that Roee Messinger makes in the later portion of the film and that is to add flourishes outside of the courtroom proceedings to paint Pantaleo as a bad guy. She hammers home the points that Pantaleo had numerous unsubstantiated reports concerning civilian charges against him. While there is no doubt they are part of the public record, and her use of them outside of the court room portion of the film are merely flourishes to show the officer as not a nice guy, their use and they way they are included, despite being fleeting, will allow those who think Pantaleo was right in what he did to dismiss the film as a hatchet job. Those seconds of screen time make this a film some people can dismiss if they choose to. But that is a quibble.

Ultimately AMERICAN TRIAL:THE ERIC GARNER STORY is a kick in the ass and a wake up call concerning the criminal justice system. It is a must see film.

The film is World Premiering  today at the New York Film Festival at 6pm. Tickets are free. For more information and tickets go here.
Posted by Steve Kopian at October 12, 2019