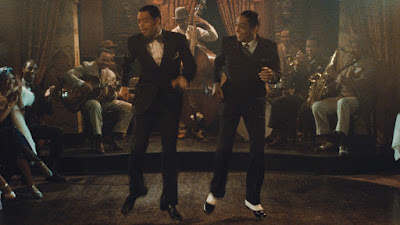 Apparently I never reviewed THE COTTON CLUB here at Unseen Films. That's kind of odd since I was a huge fan from the start of the film despite it taking a drubbing in it's day. I pretty much love it from start to finish.  However because I never reviewed it I'm going to shy away from doing so now since to the best of my recollection this new cut of the film alters things up enough that I don't want to make it seem like I am raving about this version.

The story of the film follows the paths of a coronet player played by Richard Gere, who moves through the jazz circles  and is known at the legendary Cotton Club. His friend is a dancer played by Gregory Hines who aspires to work at the club with his brother as a headliner. Added into the mix is gangster Dutch Schultz, who befriends Gere when he saves the Dutchman's life. Romances come and go as fortunes rich and fall. Through it all is the titled night club.

The tale of the making of the film probably could be a film itself with Robert Evans, starting the project as director, leaving the project and then suing over it. There were all sorts of fights concerning the film including who would get final cut. Coppola was supposed to get it but even so the film released was not the version he wanted  to release....

...which brings us to THE COTTON CLUB ENCORE which sees Coppola revisiting his legendary, and perhaps classic, film.

Listing as running 12 minutes longer than the release version, the film according to Coppola at the post New York Film Festival screening Q&A actually contains 35 minutes of changes (The Q&A can be found here) which includes a couple of new musical numbers, and a shifting of the narratives so that the story line of the Hines brothers and African American characters gets equal time to the white story line. To be honest most of the new material is really good. There is a nice fleshing out of the Hines romance with Leonette McKee with some great lines that make it clear that Coppola and co-writer William Kennedy were not as racially blind as some people claimed when the film came out.

The real problem for me is that in order to make the film a manageable length changes had to be made. You will forgive me for not being absolutely specific, the last time I saw the film from first frame to last was a few years ago, but the changes such as trimming the screen time of Bob Hoskins and Fred Gwynne's owners of the Cotton Club as well as some other bits, makes the narrative less cohesive.  While I completely understand stuff had to go to give the balance Coppola intended a few too many details went and I found I was less connected to the story because details and shadings seemed to be missing. I hope to rewatch the original cut again soon so I can report back on the changes but for now it seems like too much material is missing.

The physical restoration itself is pretty good. While you can see some image difference between some sequences, mostly it has a glorious old school feel to it. The sound is largely first rate, though I did notice that some of the music mix was less spacious and immediate than some others. Sometimes it sounded liked there as a band on stage performing live and some times it sounded recorded.

Over all I enjoyed seeing the film on the big screen once more, though some part of me would like one more edit to really get it right and restore what I believe are some missing tidbits. 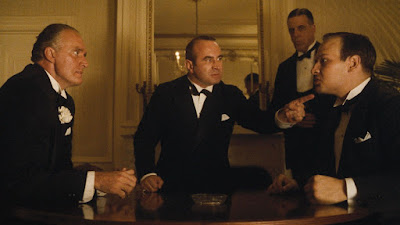