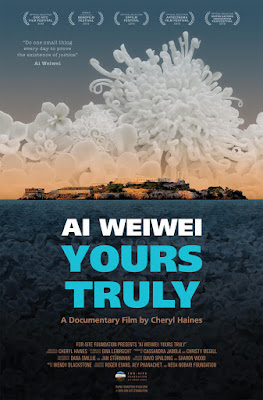 AI WEIWEI YOURS TRULY is a great film. It is a near perfect look at WeiWei’s art installation that took place on Alcatraz Island.

The exhibition was put together in the hope of highlighting the plight of 100 political prisoners and those of conscious across the globe. Spread around the island It consisted of a giant dragon kite center piece, around which it used the prison to highlight what it means to be a prisoner, as well as giving a place for the words of the various prisoners to be heard. Visitors could then write postcards to the prisoners, some of which we see delivered.

The film charts the course of Weiwei’s exhibition of initial inception through its creation, exhibition and beyond the film let’s us into Weiwei’s creative process unlike almost any other film. We are there at every step watching how it was made, listening to the discussions of what he and the organizers hoped to achieve and most importantly, and uniquely, the effect it had on the people who saw it and those highlighted.

I am kind of in awe of this film. It’s so good that I’ve been working on this piece for the better part of a week. Normally I can get a piece together in a day or so, but with YOURS TRULY there has been this need to make sure the words are all right. Weiwei did something special so I want my piece to at least be the best that I could do.

This is for the most part a super record of an Ai WeiWei project and how it affects both the people who see it and the people it is about. Watching WeiWei put the piece together long distance is something amazing. How he can manage to create such a magical piece of art when he is thousands of miles away is amazing. Equally amazing is watching his mental wheels spin coming up with a way to engage his audience. How do we draw in the young? Make portraits of the prisoners out of Lego. It may sound like something stupid, but when we see the family of one Arab Spring leader Ahmed Maher there are baskets of Lego in the house.

What makes this film truly magical is that not only do we get to see the words of the various prisoners of conscious move those in the exhibition, we also get to see the words of the visitors on the prisoners. The film very clearly shows us that they are moved that their actions have moved people across the globe. The fact that director Cheryl Haines takes the time to show us how words can move people and give hope is stunning. I got teary watching watch some of the most moving moments in any film all year

This is one of the great films of the year. A must see at DOC NYC.