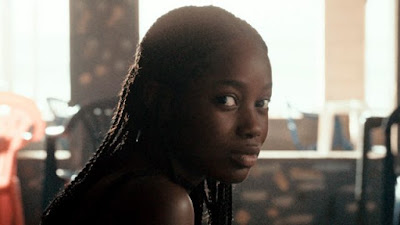 The first thing I need to say about ATLANTICSis forget the hype. Forget the awards. Forget the way people have described it and just go see it blind. I say this because everything I have read or heard about the film has been completely wrong.

The film concerns a young woman named Ada who is betrothed to a man named Omar but who really loves a laborer named Soulimon. When Soilmon and his friends are not paid for their work for four months on a construction sight they take a boat and head to Spain. Ada and the other women are left to their own devices. As Ada’s wedding to Omar approaches strange things begin to happen. Her wedding bed spontaniously combusts, the womenin the city seem to become possessed by spirits and there are eird things going on with the police officer investigating events.

Forget this being a horror film, despite the supernatural aspect this is a drama/romance and it is a moving one at that. Moving with its own rhythms and in its own way this is a lovely small film. We fall in with Ada and her plight. We come to understand, as much as possible her world. This is a lovely exploration of the course of the human heart.

For me the problem with the film was the making of the hype machine. As good as the film is I am kind of lost as to why it won Cannes. Its good but I don’t see it as being at that level. I am also kind of lost about how the film is a great tract on feminism and the plight of the African woman. While I see the thematic elements that many reviews have claimed are in the film, but at the same time I would argue that the threads are not fully explored. Yes we get that many women are left when their men go off but at the same time the film doesn’t say a whole hell of a lot about it other than it happens.

But don’t let what other people have said get in the way of enjoying the film. Simply see it and enjoy a lovely little film.