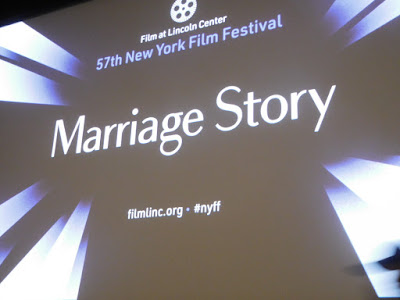 The Centerpiece for the New York Film Festival was Noah Baumbach's MARRIAGE STORY which is being sold as an Oscar shoe in and, for many, the greatest thing since sliced bread. Clearly everyone saying this is either undead fans of Baumbach or in the employ of the director or Netflix.

The film is the story of the ending of a marriage that starts out attempting to be amicable, turns nasty when Scarlett Johannson moves to California for a TV series and gets hooked up with a shark of an attorney played by Laura Dern. Meanwhile hubby Adam Driver attempts to deal with the turn of events that are turning his life upside down.

Having a killer beginning where we hear the nice things the couple has to say about each other as they go into therapy and an ending that ties into that start, MARRIAGE STORY spend the two hour in between giving us contrivance after contrivance, badly written characters (the observer), a couple of Sondheim songs,  some awful performances (Julie Haggerty is beyond bad in a beyond bad role),  and every now and again a good bit here and there. It is nowhere near the masterpiece many outlets have been saying.

Okay, full disclosure I am not a Baumbach fan.  While I liked but didn't love many of his films I broke with him at WHILE WE"RE YOUNG when his film abandoned everything that had had gone on in the previous 2 hours to end with a huge "what the fuck" ending as characters turned on a dime for a curtain closer that came out of left field just because Baumbach  realized he wanted that ending after he had filmed the rest of the film. He actually said to a New York Film Festival audience that nothing other than the very end of the film mattered and we should disregard it.

While there is no going off the cliff here there is a lot of head scratching as things go weird for no reason (the knife trick) and everything seems geared just to get a longer running time out of the film.

I have two huge complaints, one story related and one technical. The first comes from the fact that at no point in what we see is there any reason for the couple to break up. All of the problems seem to be off screen and any problems we do see seems to be purely the result of the situation the pair is in. The couple clearly loves each other and for the most part it never is really clear why they are getting a divorce. They say they can't live with each other but at the same time they spend pretty much every non-divorce moment kind of like a couple in love. Friends of mine who broke up and who remain friendly, occasionally would show signs of what went wrong. Here  it's told to us but we never see it, even for an instant. We need to see it to have the ah ha moment for ourselves.

The second problem is that several times in the film Baumbach cuts between shots during very emotional moments. For example during a key sequence where Driver and Johannson talk and then fight the camera keeps cutting between shots. It might have worked had the performances between each shot been closer in quality, but they are not. It feels like, what it is, a series of individual shots instead of one long argument. We are not in a moment of time, we are watching "movie magic" where obvios different takes were cut together but the film is being held together with cellophane tape and not cement. That this happened isn't surprising since at the New York Film Festival press conference Baumbach said that he shot the film as a series of shots not sequences. He knew what every shot in the film was going to be when he started and he shot that. It was the wrong way to do it since if you watch the film with even a non-critical eye you realize that many sequences are made up of differing shots from different takes. Personally that's a big reason why the film fails to generate any heat what so ever- we are not watching life or moments but individual shots that have been tied together.

Strangely the very end of the film made me cry. The last shots as Driver carries his son to his car and is stopped by Johannson who comes over to tie his shoes wrecked me. It was a small loving moment. that backed up by the son previously reading his mother's note about his dad that began the film laid me low....

...that was until I realized the earlier part of the sequence made no sense since it introduces Johannson new beau who has zero weight, and had references Johannson's just being nominated for an Emmy- an award handed out a month earlier and a couple other details that made no sense. Of course I shouldn't have noticed the problems  and just went with the emotion, but unfortunately MARRIAGE STORY never cared enough about anything other than the superficial so all I was left to do was see the man behind the curtain.

Ultimately a waste of some wonderful moments.
Posted by Steve Kopian at October 09, 2019