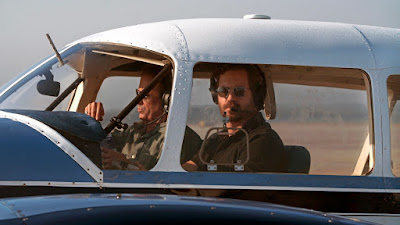 I love Olivier Assayas but the programmers of the New York Film Festival need to stop taking pretty much everything that he does as a Main Slate title. I think every film he's made except one in the last 10 years has been on the Main Slate. In most cases that's been good, but there have been a couple that they should have passed on, particularly this years THE WASP NETWORK.

The story of a bunch of Cuban "defectors" who are were really spies for Castro is, on the face of it a good one. The trouble is that the story is told so haphazardly that it's hard to follow. Until about half way in, when it's revealed the defectors are in fact spies the plot almost is pure murk. I honestly had no idea what was going on and just went with it because I figured it would sort itself out.

It kind of did, but then I realized that outside of the Penelope Cruz character there are no characters just cut outs being moved around. Frankly at no point anywhere in this does anyone, outside of the infant in the last couple of minutes, have real characteristics. These aren't people, these are puppets. The fact that there are no characters is really odd because even when Assayas's earlier films didn't work you at least had real people wandering through. Here there is nothing.

I think part of the problem is that this story is way two big for a film that's just over two and a quarter hours. This should have been a mini-series because there are too many people doing too many things for such a short period of time. We never get a sense of what anyone is really doing, they are just in places at certain times.

The one shining light in the film is the aforementioned infant, who, according to Assayas and Penelope Cruz after the NYFF press screening, was a natural actor. The baby simply fell in love the the actors and just gushed for the. She is so good she deserves an Oscar.(no really-see the film and you'll agree).

Baby aside this is a major miss from a great director.
Posted by Steve Kopian at October 06, 2019