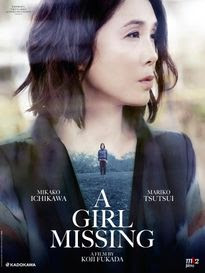 A woman working as a nurse has her life wrecked when she mentions that she is related to the kidnapper of one of the girls in the family she works for.

A love it or loath it film is either going to get under you skin or bore you to tears. Count me as one of the bored. The observational style mixed with the jumbled story line kept me at a distance from what was going on and by the 20 minute mark I was just hanging around out of obligation to write about it as being part of the New York Film Festival. Forgive me but there simply isn't enough here to make a compelling drama and the rearranging of the storyline  seems like its a way of covering up that fact.

There seems to be strata of films from Japan that are beautifully put together and stunningly acted but are so incredibly icy and cold that it is impossible to connect to them. I a not really a fan since they always seem to confuse dispassionate distance for meaning. To me A GIRL MISSING and the similar films are dead films with no soul in them.