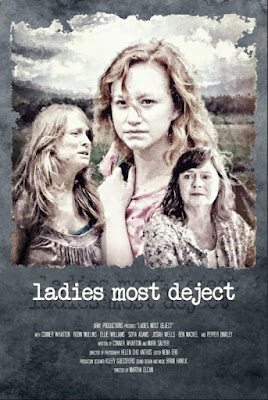 LADIES MOST DEJECT is a good short film that should have been a feature. The story of a young girl who must take steps to keep her sisters safe from her addict mother and dealer uncle is much too short to do the subject justice. It's really good  but while the film is clearly willing to deal with such a complex subject such as addiction on a family, the fact that it runs only 15 minutes works against it. (which is probably the film's only flaw)

Don’t get me wrong this is a nicely acted film that looks good and which puts addiction into the neat little homes that look like there isn’t any dark secret hiding inside. It’s a moving tale that needs to be told. However at the same time had the film had more time to build the emotion this would have been a kick ass film.

I want to see director Martha Elcan go back and shoot this a feature. I have no idea whether this is proof or concept or not but if it’s not it should be. While there have been any number similar films there is something about LADIES that stands out and makes me want to see a longer version. Perhaps it’s simply that while the basic tale is similar to others what Elcan and her writers have done with it is not.

(Addendum- after I wrote the review I found out that the film was written in part by Conner Wharton who plays Charlie in the film. Ms Barton was teenager when she wrote the screenplay. Having been subjected to the publicity push for BURNING CANE an over praised first film that was written when the director as 15 and feels like it, I need to say that Ms Wharton is the better writer.  Having created a world of real characters and real situations that bleed off the screen Ms Wharton needs to keep writing. Please Ms Barton keep doing what you are doing and making films and  don't let anyone tell you no. And the same holds true to Ms Elcan whose crafting the film from the page is something special. We need to hear your voices)

As it stand LADIES MOST DEJECT is a good little film that’s worth your time when it plays at the La Femme International Film Festival but it will be worth even more if we ever get to see a longer version.

LADIES MOST DEJECT screens 2pm on Friday, October 18 at the Regal Theatre at LA LIVE in downtown Los Angeles. For more information and tickets go here.
Posted by Steve Kopian at October 16, 2019