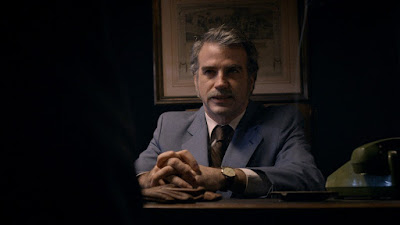 Spanning two decades in the life of Humberto Brause (Daniel Hendler) THE MONEYCHANGER is about an amoral nebish who manages to bluff his way through life and fortune despite having no scruples what so ever. People come and go fortunes rise and fall and somehow Brause remains through it all.

I think part of my uncertainty toward the film is I don't know what to make of Daniel Hendler's Brause. Forever in earthy and ugly polyester leisure suits, his hair slightly messed up and his face in an awkward yet some how blank expression (with a bad set of upper dentures, and sprayed in gray hair) I wasn't sure what anyone saw in him. He clearly wonders that at the beginning when his future father in law takes him under his wing, but as an audience we are left to ponder the same thing but unfortunately we never quite get an answer. I found him a kind of a twit and went along with it because I was curious how the film was going to play out.

I'm also not certain if I am not a fan of the rest of the cast or if its purely a directorial choices such as having Delores Fonzi who plays Brause's future wife as a teenager despite being clearly too old. Something seemed off about the film and the cast and I really need a second or third trip through to see what it is.

And that last line is key- I do want to see the film again a few more times, because despite my reservations there is a really good story here. The trouble is just that it's good enough that I wanted it to be great and for right now it doesn't seem to be. And any film I want to see a second or third time definitely has something worth seeing and THE MONEYCHANGER is worth seeing when it plays at the New York Film Festival. 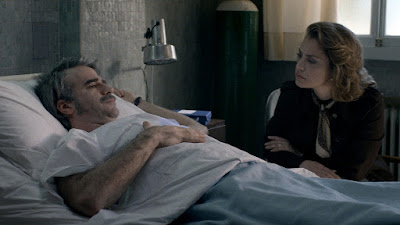