Why I am not reviewing PAIN AND GLORY (2019) right now 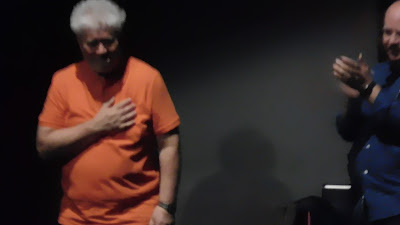 I saw Pedro Almodovar’s PAIN AND GLORY at the second public screening at the New York Film Festival and it rocked my world. The story of a film director taking stock of his life as he prepares for a festival screening of his classic from 30 plus years before hit home. In the second half of the film as Antonio Banderas’s Salvo dealt with the reappearance of his great love and tried to come to terms with his aging mother I found myself deeply connected to the film on a deep personal level. Almodovar was giving expression to things that I had been wrestling with in regard to my own love life not to mention my own parents. Tears streamed down my face as I watched bits of my heart and life explode on the screen of Alice Tully.

To be honest I’m not in a position to review the film, yet. While I can say without reservation that it is a great film with an Oscar worthy performance by Antonio Banderas, I’m not in a place where I can really talk about the film beyond that. While the fact that I saw the film on my dime and the fact that the film is coming to local theaters in a few weeks means I could have held off until whenever, the fact that I posted video and pictures from the screening means I feel as though I should include something as part of my NYFF coverage. To that end I simply want to say:

PAIN AND GLORY is a great film. Go see it.

Further thoughts will be coming down the road as soon as I find them.

A review from Nate hood will follow in a day or so
Posted by Steve Kopian at October 01, 2019