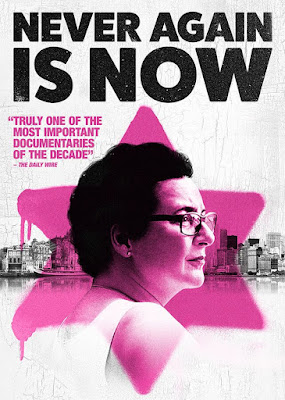 Never Again is Now is a look at the rise of anti-Semitism in world over the last few years the film follows filmmaker Evelyn Markus as she tries to find out what happened to bring about the hatred that fills so much of the world.

Once the film gets going, and focuses on the current feelings of anti-Semitism and it’s roots Never Again is Now fires on all cylinders. Taking the discussion into places that most other film haven’t gone the film finds that reasons behind the hatred are not as simple as many people would have us believe. For example notes that things began to change after the Arab Israeli wars of the 60’s and 70’s when Israel expanded it’s borders and the views of the country changed, and even the Liberal Left began to see the Israelis as something other than just good. As Markus notes the complex feelings that this created affected Jews all over the world as people instantly assumed they were Israeli in feeling. Markus also investigates the influx of Muslim immigrants as well as the fallout of 9/11. I love that a chunk of this film doesn’t follow the path so many other films have followed and that it broadens the discussion.

As good as the film is in places, in others the film seems to be spinning its wheels or going off the track. For example a good chunk of the first 20 to 30 minutes are filled with Markus family story in Germany and the soldiers who liberated them from the train to the gas chambers. Its definitely an interesting tale but it seems out of place in a film that is being billed as an exploration of the current state of the world. While I know that the story is the springboard for the tale, there is simply too much and until about the half hour mark I wasn’t sure what the focus was going to be.

However, as I said above once the film gets on track the film goes and as I said it takes the discussion into some places that we as an audience haven’t been before and as such is a compelling look at hatred in today’s world.