After failing to stop a demon that killed his master a samurai is sent on a quest of vengeance with only a living severed head for company.

This puppet animated short film is one of the best horror films you'll see all year.  A stunning piece of cinematic story telling it puts  most live action films to shame. Creating a tactile world of monsters and men, everyone on screen feels like a fully formed character who are on a very real and suspenseful quest. Think of this as spiritual cousin to the Dark Crystal but with ghosts and samurai.

If there is any sort of flaw in the film it is that this is very clearly only a small portion of the tale. Beginning on a very real cliff that our hero is scaling in order to find the Black Monk, the film races along to a logical breaking point...which still leaves a huge portion of the tale untold. 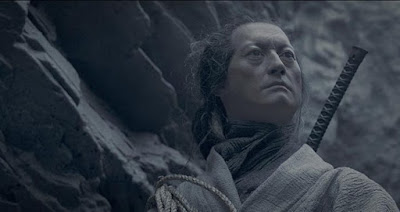 I am in awe of this film. This is what the movies were supposed to do, take us to some place else and tell us wondrous stories. I just hope that director Kevin McTurk can be convinced to continue the tale... assuming he can find the financing to do so.

One of my favorite films of 2019 THE HAUNTED SWORDSMAN is a must see.

The film is currently on the festival circuit so keep an eye out for it.