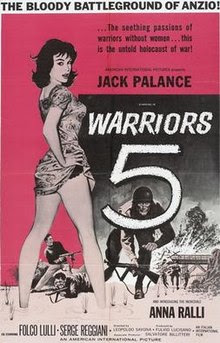 Five Italian soldiers run off into the country after Italy Surrenders to the Americans. The quintet run into an American soldier (played by Jack Palance) who was sent to blow up a bridge. Palance's men were killed when they landed in a minefield. When they run into a German held town where they are threatening to kill the men of the town if hidden American Soldiers aren't turned over the men decide to help Palance.

More war drama than war film is a nice change  of pace from the ordinary- that is assuming you don't go in looking for a balls to the wall action film. This is a film that shows what it must have been like when Italy was caught between warring parties. Recommended for those who want a change of pace with some action in the tail,
Posted by Steve Kopian at October 20, 2019