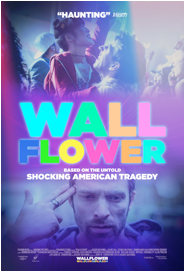 Opening Friday in NYC with a wider release on the the 18th is WALLFLOWER a story based on the 2006 Seattle Capitol Hill massacre that left six dead and two wounded when a man left a rave after party and returned with guns and opened fire. The film was written and directed by Jagger Gravning who was at the rave before the party.

This is a stunningly made film with the scenes of the shooting, which are intercut with flashbacks of what went before, being truly chilling. It is a frighteningly real series of sequences that have the proper effect which is to freak us out. This is the ugliness of the now frequent massacres given cinematic life. It is not for the squeamish.

The cast is petty much dead nuts perfect. As much as I would like to single someone out, they are all so good that to do so would be unfair to anyone I didn't mention.

Actually pretty much everything in this film is perfect...except the film never quite generates any sort of emotional connection except as a depiction of a horrific act. For all the voice over, for all the following of The Murderer around, we never get any clue as to who he is or really why.  While that maybe the point, the real life shooter is equally enigmatic, it gives us nothing to hold on to or care about. Yes, he is a lost soul but there really isn't enough here to make us full engage.He is a real world counterpart of Jason Voorees, except that that instead of being a literary representation  of our fears, he is a real person and we require something more, some sort of clue about him especialy since he is our focus for the entire running time.  I'm not sure if this disconnect is because of the fractured time frame or because there just isn't enough here or if its both. (I'm leaning toward both since while we are ultimately limited in what we know, the fractured time frame never allows us to build any connection)

Ultimately WALLFLOWER disappoints. Despite being one of the best made films I've run across this year on so many levels, it never connected with me on any human level except in the horror of the shooting itself, which is not the sort of thing you want for a film like this.
Posted by Steve Kopian at October 03, 2019