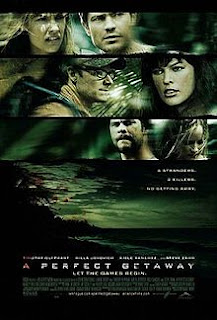 Couple, Steve Zahn and Milla Jovovich, on their honeymoon in Hawaii run into trouble when they run across a couple of other couples deep in the jungle of the island. Something seems wrong with them and they begin feeling uneasy as a news report says that police are looking for the killers of couple that removed the teeth and fingerprints of their victims. Could one of the couples be responsible? David Twohy makes a good little thriller that has some nice twists and turns in it. Is it perfect? no, but it is a nifty little thriller that manages to generate a great seal of tension based on characters and situations. I was attracted to the film because I was told that the film had some good twists to it, twists that actually belonged in the film (as opposed to most films which have twists just to have twists even though they make no sense). I don't know if all of what happened surprised me, but at the same time what did happen felt right which helped.

Also helping is stunning photography which really makes you want to jump on a plane and go to the jungles yourself.

The cast is across the board great. I especially like that everyone plays it straight and real so you never feel that anyone is really hamming it up. I want to give this film points for giving Steve Zahn a role where he's not a complete nudnick.

If you like thrillers this is worth a shot. I don't know if its worth full movie prices to see but as a rental or on cable its worth the time and the effort.
Posted by Steve Kopian at October 26, 2019