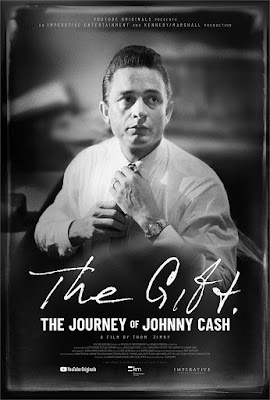 Fifteen minutes into THE GIFT: THE JOURNEY OF JOHNNY CASH I was wondering why there wasn’t more buzz about this film. There I was staring at the screen with a stupid grin on my face, singing along to the songs and wondering why this film was not being discussed as an Oscar contender. Actually I was just wondering why it simply wasn’t being talked about period because, frankly it is just so damn good.

The film is a collection of film, photos and interviews covering the life and times of Johnny Cash. There are no talking heads, just the words and music of Cash, his family, his friends, collaborators and the people who he influenced. It’s a celebration of the man and his music that doesn’t shy away from the craziness. It’s a film that tells his story from his point of view more or less and we are better for it.

Watching this film I was in heaven. I stopped being a critical writer and reverted to just a fan of Cash, lost in the music and stories. What a great film.

A word of warning this film isn’t going to tell you everything you might want to know about Cash. This is not a typical biography, rather it is a film about then journey of Cash the man to be better man. We watch his struggles for social justice and his problems with substances. This is film about the arc of his life not about all of the moments. (Though we get some killer moments such as a description of his first meeting with Bob Dylan which was a mutual admiration society that had them literally jumping on the beds in a hotel room.)

I love this film. When it was done I just wanted to put it on again and just listen to the music and the words and be in the presence of the great man one more time.

I don’t know what else to say beyond that other than either see it when it opens Friday in NYC, on the 25th in Los Angeles or when it hits You Tube premium services in November
Posted by Steve Kopian at October 07, 2019