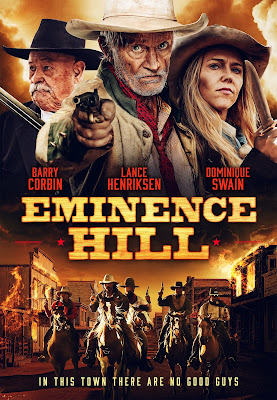 A outlaw and his gang come upon a homestead, kill the husband and wife before riding off with their daughter.  They are chased by a US Marshal who springs a former member of the gang to help him track them down...

A good cast is lost in a badly made movie. Looking like any other low budget films that are quickly churned out for a profit the film has no sense of reality anywhere in it, only the sense that it was made fast and and with only profit on it's mind instead of love. Yea its competent, to a point, but never believable.

Worse the billing of the leads Lance Henriksen, Barry Corbin and Dominique Swain is largely misleading in that Henriksen only appears in a single scene an hour in, Corbin is pure support as a member of a cult the outlaws encounter and While Swain plays one of the outlaws, she is off screen for a chunk of the film and seems to be phoning it in when she is required to act.

What kills me is is that had a little love been shown the story this could have been a good film. The lot is pretty good, the twists far from cliche and most of the performers aren't bad. Sadly the producers and the directors cut their own legs off to get a couple of bucks out of an unsuspecting public.

Not recommended, EMINENCE HILL hits theaters Friday and home video next week. Do yourself a favor and don't waste your money on it.
Posted by Steve Kopian at October 29, 2019