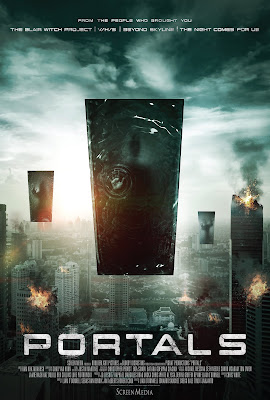 After man manages to make a black hole in a lab, there is a world wide blackout before the power goes back on. Soon after strange portals begin appearing everywhere with no one having any idea what they are or where they lead....

From that premise are spun four tales, the first that serves as bookends involving the scientists who created the black hole; the second concerns a family who chose to flee the chaos and end up hitting a portal with their car; the third concerns a 911 call center where the operators fear for loved ones, and then themselves when a portal appears in the room with them and lastly the events the occur in a parking garage in Thailand. The stories are all good to various degrees, with the best being the call center one which spins out before we know anything.

As things go this is one of the best portmanteau film in quite some time. While the stories are uneven to some degree, the tales that are best tell us the least, none of them are in anyway bad. The quality is simply a matter of personal preference. To be honest I found the more mysterious  one best because the mystery they create is so strong that whatever answers they provide can't live up to the expectation. That is not a knock, only a comment to explain why I love some parts more than others and why some parts are destined to be considered classic while others are just going to be liked.

Ultimately this is a scary little film and highly recommended.
Posted by Steve Kopian at October 24, 2019