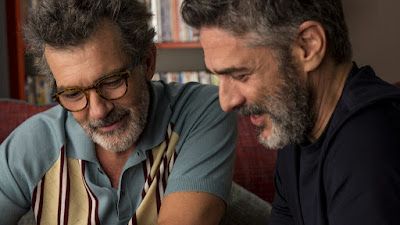 Time waits for no man, least of all artists, and within the last year we've seen several canon filmmakers turn reticent and reflective. Martin Scorsese's elegiac The Irishman is the most prominent, but both Quentin Tarantino's melancholic Once Upon a Time in Hollywood and Jim Jarmusch's critical kiss-off The Dead Don’t Die can be read as meditations for growing old and irrelevant.

Now it seems Pedro Almodóvar has joined them with his newest film Pain and Glory. This shift towards somber pensiveness is quite unexpected seeing how few directors have spent so many years embracing the highs, lows, joys, and sorrows of life and living. But he's seventy now, and after spending almost forty behind a camera he's finally looking around and taking an assessment of things. He's claimed that all of his films have been autobiographical, but perhaps none have drawn so specifically from his life as Pain and Glory. It centers on Salvador Mallo (Antonio Banderas), an aging Spanish director grappling with his own mortality after his body starts shutting down. As he reconnects with people from his life and career—chiefly actor Alberto Crespo (Asier Etxeandia) whom he worked with once thirty-two years before and never spoke to again—he reflects on growing up in an impoverished Spanish community of cave dwellers with his mother Jacinta (Penelope Cruz) who sacrificed everything to get him into a seminary for a free education.

The entire movie is an interplay of past and present as Mallo's childhood reminiscences bleed over into his waking life, particularly after he starts smoking heroin to deal with back pain from a recent surgery. We see Mallo as a boy discover a love of cinema, art, then instructing (or "directing") others, initially through tutoring an illiterate village laborer how to read and write. Finally, we see his homosexual awakening in an astonishing scene where he spies on the laborer bathing and faints from "sunstroke." These scenes are juxtaposed with Mallo's rediscovery of artistic longing as he writes and adapts a short story as a play for Crespo, reunites with a former lover, and starts fighting his new addiction. Almodóvar seems quite explicit: if art is life then creating it gives life meaning. Combined with the kaleidoscopic colors and images of his earlier work—those beautiful cave tiles and apartment kitchens!—this thesis on creation is Almodóvar's best and most essential film in years.