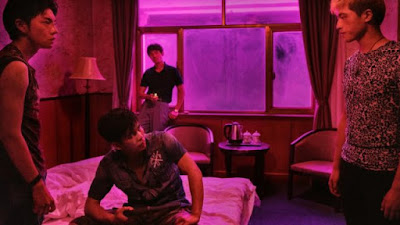 I have a friend who confided to me that if Diao Yinan's The Wild Goose Lake was forty minutes shorter it'd be one of the best films of 2019. Perhaps. But it also wouldn't be the same film, figuratively and literally. The pauses, the padding, the interminable anhedonic stasis—these are the essential elements of Yinan's bleary-eyed neo-noir vision of industrial Wuhan. There are characters and a story, but they seem to exist solely to organize Yinan's strange images and aesthetic observations into a cohesive whole. Even the most enthusiastic reviews for the film I could find admit the plot becomes nigh incomprehensible in the last act. But this has rarely mattered for film noir devotees—consider the famous anecdote about Raymond Chandler not knowing or caring about the identity of the chauffeur's murderer in his seminal "The Big Sleep." Additionally, noir has historically been one of the few popular film genres to embrace atmosphere and introspection at the expense of momentum or excitement.

Even so, The Wild Goose Lake struggles to make proper use of its tedium. The film centers on a mobster named Zhou Zenong (Hu Ge) who goes on the run after accidentally killing a cop during a gunfight. The police are determined to stop him, but in a twist reminiscent of Fritz Land's noir-progenitor M (1931) so are his fellow criminals. Pissing off the cops is bad for business, you see, and only by killing Zhou will they get the authorities to leave them alone. Along the way he meets Liu Aiai (Gwei Lun-mei), a prostitute who either wants to help him, betray him, or both. Or perhaps neither? It hardly matters; the specifics of her role scarcely seem more important than her necessity as a noir archetype.

Again, the story is secondary to Yinan's images and set pieces. And to his credit they're equally hypnotic and disturbing: a warehouse brawl between competing gangs utilizing Eisenstein montage; a midnight chase through a zoo of startled animals; an unexpected motorcycle decapitation. But to what end? That modern China exists in a listless capitalist haze? Sure, but Yinan's use of narcoleptic pacing combined with flashy spurts of ultraviolence and graphic sex has been done before, even in his own previous film Black Coal, Thin Ice (2014). Side note: Lee Harry’s Silent Night, Deadly Night Part 2 (1987) did that umbrella kill first and better.