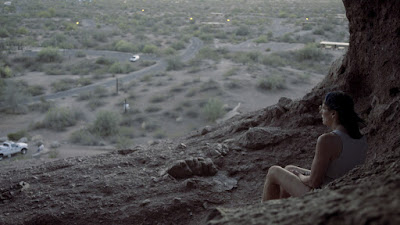 Director Tracey Thomas turns 60 and decides that she wants to investigate what it means to turn 60. She then begins to interview various people about being that age. However things begin to change when her partner gets ill and dies things change....

This is a philosophical essay/portrait/documentary / very meta exploration of life, death and everything in between. It's a film that is cinematic quest to find out what it all means and how Thomas is forced to cope with some of the things life unexpectedly throws at her. It is exactly the sort of film that an experienced filmmaker (this really is Thomas's first attempt at making a film) would never do, and as a result is infinitely more profound than we ever could have hoped.

To be certain the film is uneven, but at the same time the fact that the film was made by some one who wasn't playing by the rules means we get unexpected turns. Thomas, or her surrogates, aked atypical questions and shot things that most other people would never think of. The result is we are not watching a film but being part of her grand experiment, but also her life. There are no walls, there just is people and places and it all bleeds off the screen.

I am in awe of this film since it doesn't seem to be a film so much as a living document that we can and will interact with over time, not just the run time, but the time in our lives. Watching the film I was very aware that how the film is seen will be determined by how old you are. I'm not that far removed from turning 60 and I am struggling with some of the issues raised. I can relate to the discussions. However, I suspect that someone younger, like the 30 year old selves discussed in the film will take a different view of the film...and then assuming they are wise enough to revisit the film years down the road will find their thoughts on the film changing as they experience the passage of time themselves.

You will forgive me for not doing a deep dive on the film but I am still processing it. I suspect that the film will be haunting me for days to come. I suspect that I probably should not be reviewing the film  so close to seeing it, but I think that if I wait for the right time, I will be weeks and months down the road. For better or worse MY FIRST AND LAST FILM is a much too important film not to be on your radar, and so I raced to get something up to tie in with the World Premiere.

Frankly I don't know if you will like the film. I don't know what I fully think of it myself, however I know that it has gotten my head going a like a quintuple shot of espresso- which is something few films ever do.  For that alone the film is recommended. And it's also recommended because love it or loath it it is a film you will have to engage with, whether you want to or not. 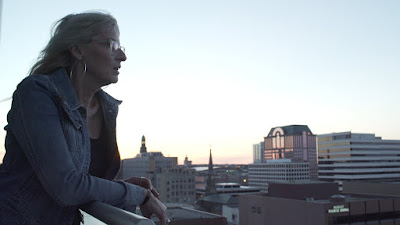