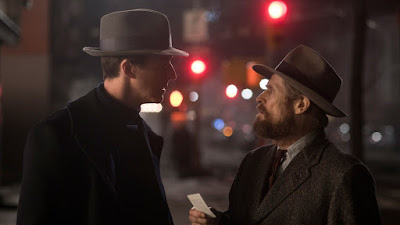 Edward Norton takes Jonathan Lethem's present day set mystery novel and re-imagines it as a neo-noir set in 1950's New York. It is the story of a detective with Tourette syndrome and a photographic memory, who tries to solve the mystery of what happened to his boss who is killed when a job he was working on goes horribly wrong. The trail leads him into a Harlem jazz club,  the "slums" of Brooklyn and a run in with a power broker modeled on New York's infamous Robert Moses.

Self indulgent and wildly over long, this runs just short of two and a half hours for no good reason, MOTHERLESS BROOKLYN still manages to be a good mystery. Its a compelling story that marches us through the time in the late 1950's when Civil Rights were being fought for, a way of life was disappearing, the Dodgers were leaving Brooklyn and an unelected man was the real power in New York State. How those things come together forms a compelling mystery that doesn't quite go as expect, which gets the film several extra bonus points.

Looking like a film from a couple decades back, the film is full of smokey dives, halls of power and skylines unadorned by ugly skyscrapers. This film is a stunningly made film with a real visual sense that keeps us buried in it's own world.

It is propelled by a good jazz score, which while occasionally intrusive, makes for some wonderful moments such as the dance in the Harlem jazz club. It is do good that after the New York Film Festival press screening numerous people were pondering if a soundtrack album would be released because they wanted copies. 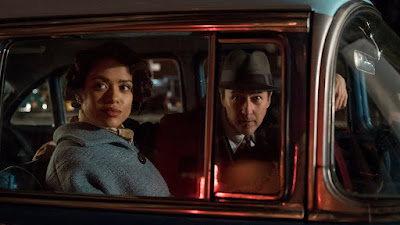 The cast headed by Norton and containing Alec Baldwin, Bruce Willis, Willem Dafoe, Gugu Mbatha-Raw, Bobby Cannavale, Leslie Mann, and Cherry Jones is first rate. And while I didn't think Willis was right for his role at the start, I realized by the end that the role of the man who sets it all in motion needed some one like Willis to give him weight that carried all the way though the films ove long run time.

The rewriting of Lethem's novel, its more a starting point than remotely faithful adaption, is quite good, with the single exception of Willem Dafoe's character who is not so much a person but an exposition machine in human form. While ultimately vital to the plot, more times than not he appears simply to give information to push the film along.

Strangely despite all of my quibbles, and they are quibbles in the grand scheme of things, the one thing truly working against the film is the fact that Edward Norton paced the film much too slowly. If he had picked up the pace of sequences (it's not a matter of cutting scenes) this film could have been a half an hour shorter and thus would have gone from a good film into being a great one. Norton lets the action play out too slackly with the result that our interest waivers and we have time to think about things which we shouldn't think about.

Still despite my reservations I did like the film, and I do recommend it for anyone who wants a good old school mystery. 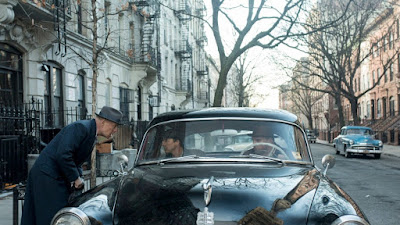