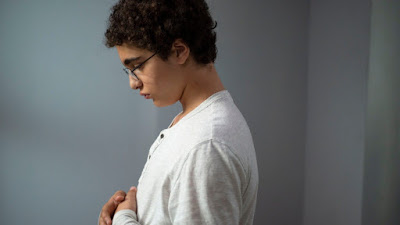 The discussions in the days following the press screening of Jean-Pierre and Luc Dardenne's YOUNG AHMED centered about how it didn't really work. Some people liked it more than others. Most people had problems with the ending, which is kind of odd.  Other people, myself included, had other issues with it. Regardless of the feelings pro or con it was a film that was still being discussed weeks after it screened, which I think means something even if it isn't liked.

The film is the story of teen aged Ahmed who is under going the process of radicalization. Everyone can see it but no one can stop it. While he is heading toward extremism, life and the things it throws at him, such as girls, are acting as bumps along the way. However it doesn't stop him from planning something murderous.

Moving at a breakneck speed YOUNG AHMED is a film on a mission. Clearly the directors have something to say and they are going to say it as fast as possible so we don't have time to think about what we are seeing. Playing like a very well done polemic the Dardennes want us to consider the people who become radicals, unfortunately they really don't give us enough breathing room or time to really to ponder what we are seeing. Running a brisk 84 minutes YOUNG AHMED remains wholly focused on our protagonist and wholly on the points the pair wants to make and nothing else.

My problem with the film is I don't see things as clear cut on any level as the Dardennes do.There should be more shading. Blame it entirely on my steady diet of documentaries that are regular fodder for Unseen Films. There have been at least four films this year on the subject including the excellent ACCEPT THE CALL about a father's efforts to understand how his son could be radicalized. It's a similar story to YOUNG AHMED and the fact that it has hung with me since I saw it in June (it's one of the best films I saw in 2019) colored how I saw this film particularly in the fact that radicalization is more complex than is shown here.

Personally I don't think YOUNG AHMED works. Its well made and all of that but there is something about script that just doesn't pull it together. ..

...then again I really haven't liked the work of the Dardennes, who have always come up with intriguing ideas that never quite work. YOUNG AHMED is a perfect example of that, except it really isn't intriguing enough to really discuss.
Posted by Steve Kopian at October 10, 2019