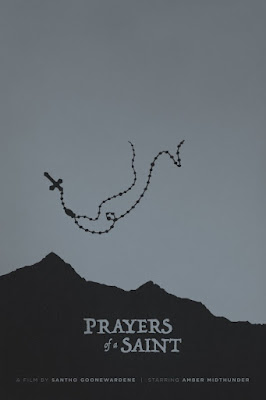 Prayers of a Saint is a kind of a conundrum for me. I had gone into the film expecting one thing based upon a press release for the film and instead got something else. The film is supposed to be about a young woman who has run away from her abusive family and while some of that is in the film there, there is a lot more less defined stuff going on, things are not entirely spelled out and I was left wondering what I was supposed to think.

To be honest I was not going to review the film. I emailed the PR person handling the the film to say that I wasn’t sure what I thought of the film and despite liking portions of the film I was going to pass because my reaction to the over all film was going to have me say things that may make it sound like I hated the film, which I don’t.

I walked away and thought no more of it…except that I didn’t think no more of it and for the last few days the acting and the crafting of the film haunted me. While director Santho Goonewardene may have made a film that is narratively a little uncertain, it emotionally packs a punch. Thinking on the film I was kind of stunned to find that the film left me emotionally cracked. I can feel a wound where the film hit me. Additionally I find that the images have haunted me and are dancing around the edges of my psyche. Understand that they are appearing to my inner eye in between the other films I’m screening and writing on. Clearly Goonewardene has made a film of quiet power.

If I maybe so bold as to state that Prayers of a Saint is one hell of a calling card. It is a wonderful representation of a filmmaker who is one to watch. Goonewardene has made a film that quietly knocks on the door and then takes over. To be honest I am still mixed on the film dramatically, but I would love to see a longer version of the story. More importantly I really want to see what Goonewardene does next.

Prayers of a Saint plays October 19th at 2PM, 2019 at LA Live in downtown Los Angeles at the La Femme Film Festival and is worth seeing for anyone who wants to see a interesting voice in film that needs to be allowed to sing in bigger projects.
Posted by Steve Kopian at October 18, 2019