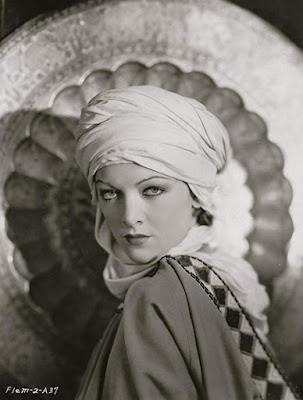 RENEGADES stars Warner Baxter as a one of a quartet of hard fighting Foreign Legionares who gets mixed up with spy Myrna Loy in the desert.

An odd mix of the the Three Musketeers with a foreign legion setting and international intrigue RENEGADES is the sort of film that don't do any more, not that they ever really did in the first place. A kind of early sound epic adventure everything you can imagine is thrown at the audience in the the hope of keeping the paying customers entertained. While is can be a tad slow, the film does keep us watching if only to find out where this is going.

Warner Baxter is a fine lead. While definitely not what we would think of as a leading man he still manages to hold out attention. I only really noticed Baxter when I saw all the Crime Doctor films, and it was in researching what else he had done that I finally put together all the other times I had seen him.

Myrna Loy is equally wonderful in the sort of role she never really got again after THE THIN MAN and subsequent films in the series changed how she was perceived. Personally I always love stumbling on one of Loy's pre-Thin Man films because you never know what sort of role she was going to play.

While occasionally creaky RENEGADES is a great deal of fun, especially on a rainy Saturday night. Recommended.