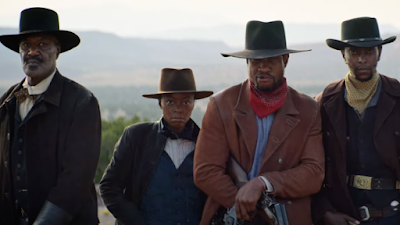 Excellent splashy western has a man looking for revenge against the outlaw who killed his parents after said bad guy is violently released from prison.

This updating of the western is a blast and a half thanks to a modern sensibility and cast and crew to die for.

The cast is sterling from top to bottom. I loved everyone in it to the point that I don't want to mention anyone lest I leave someone out. Then again I have to mention Danielle Deadwyler as Cuffee, the  person at the door of Mary's saloon. Deadwyler has created a kick ass character on so many levels. As showy as the rest of the cast is Cuffee is the one you remember and the one you root for. Deadwyler gives Cuffee a weight and a life beyond the western stereotypes that are some of the other characters.

The action is mean and nasty. Blood flies everywhere. The set pieces are a marvel in ways that are both totally unique and harken back to the classic westerns of old.

If the film has any real flaws it would have to come in the film being set in the western town that has been used in way too many recent westerns (APPALOOSA, OPEN RANGE and too many others) without much window dressing. In a film that is dead set upon revinventing the western it would have been nice if it didn't look like the ones that went before. The other quibble I have is the film's insistence on being flashy at all times. Yea, it's all perfectly done and it delights te eye, but once ot twice less would have had a bigger emotional impact.

THE HARDER THEY FALL is one of the great surprises of the year and highly recommended.