Ariela Rubin on The Novice (2021) which opens Friday 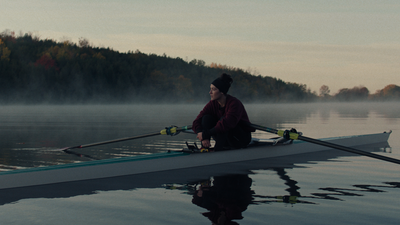 The Novice is a very intense movie about a college freshman, Alex Dall, who joins the university's rowing team and becomes very obsessed with being the best and making it to the top.  If another teammate has a faster rowing pace than her, she beats herself up for it and works even harder to get to the top. While everyone takes a break during exam period and winter break, she doesn't.  Waking up at 4:30 every day, to start practicing at 5am.

Alex is not a very likeable character, she isolates herself from the team and becomes an enemy. It's her against everyone else. (Though everyone on the team is pretty unlikeable to be honest.)  Her hands bleed from callouses and you can see her becoming more and more exhausted as the movie goes on. We never learn much about her though. What drives her? What caused her to be so obsessive? What made her decide to start rowing to begin with?

The Novice also includes a love interest between a female teachers' assistant and Alex, which I enjoyed. I really found the TA to be the only real likeable person in the movie.

This movie is difficult to watch. As a viewer, you can see Alex is on a path of self destruction and clearly needs help, but no one is helping her. There is also one very disturbing unexpected scene, which made me have to look away, and I really think the movie should have come with a trigger warning. (so FYI TW self mutilation)

The movie felt a bit long even though it's only 94 minutes, and a lot of scenes felt similar.  This is the director's first feature length. She was a rower in college and it consumed her for 4 years, so The Novice is very much based on her real life. The acting was good, but it was definitely hard to sit through, and wish it were a bit shorter. I'm also not sure what to make of the ending.

I'm not sure if I recommend it or not. It's one I need to sit on for a bit longer.