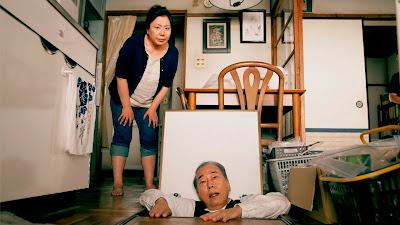 An elderly couple retires to an apartment complex after closing their herbal shop. Things then begin to spiral out in completely and wholly unexpected ways.

I’m shaking my head wondering how I never reviewed this film when it played Japan Cuts since  five minutes into the film I yelped with recognition (scaring the people around me in my office having their lunch). I suspect my lack of a review is due entirely to the fact that this film is completely off kilter. In trying to write the film up I found I couldn’t really find the words to explain to you what the film is.  Since I failed miserably  I’m simply left to say is if you want a film unlike anything you’ll see from Hollywood, then see this film.