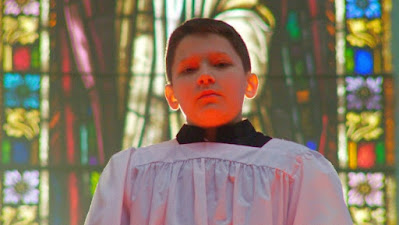 2021 has been a year of exhausting debate about what “is” and “isn’t” cinema. From MCU stans ganging up on Martin Scorsese for his ultimately innocuous opinion that Marvel movies aren’t real cinema to Zoomers and Boomers yelling at each other over the age gap in Paul Thomas Anderson’s Licorice Pizza, everyone seemed eager to pick fights. Do movies have a moral responsibility to inspire and enlighten? Are movies just brainless entertainment?

For me, these questions fall away before Robert Greene’s new documentary Procession. It doesn’t seek to inform or entertain its audience. Instead, it desires to heal its subjects. The film centers on six Kansas City area survivors of Catholic clergy sexual abuse. Years later and fully grown, they’re all still deeply, deeply broken. After seeing them in a press conference, Greene reached out and offered them a unique opportunity at therapy: write, direct, and star in six short films confronting their trauma.

Greene’s work has long plumbed the power of cinematic simulacrum—both Kate Plays Christine (2016) and Bisbee ’17 (2018) explored historical tragedies by having performers re-enact them. But these performers merely relived the trauma of others. Procession sees its survivors return to the scene and circumstances of their wounding. The results are alternatively heart-breaking, soul-crushing, devastating, and inspirational.

Some insensitive viewers might balk at the kitsch or camp of these short films. In one, the eyes of a pedophile priest glow jade green while barking evil commands. In another, someone in a Dollar Store Jesus costume glowers over a rigged pedophilia inquest. But this is a film about the healing provided by the artistic process itself. By recreating and inhabiting each other’s pain, the six become the healing community long denied them. Given full creative control to location scout or build sets, some artificially reconstruct the scenes of their abuse while others return to the actual locations. (One of the hardest scenes to watch sees one survivor have a breakdown when he returns to the idyllic lake house where he was raped by a group of priests.)

And, incredibly, all six voluntarily cast themselves in each other’s films as both bystanders and abusers. What kind of saintly compassion does a child abuse survivor need to willingly play the role of someone else’s rapist? I’m not sure, but these six survivors have it. Their strength and bravery are nothing short of literal miraculousness. So is this film.