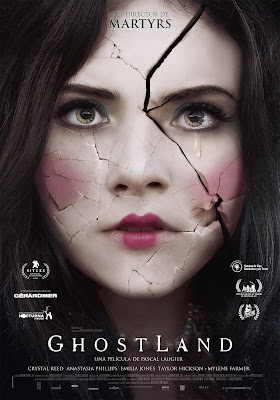 This is a brutal, ugly, nasty and not quite clear horror film from Pascal Laugier who made the infamous MARTYRS.

The film has two sisters and their mother moving into a house in the middle of nowhere when an aunt dies. Just as they begin to settle in they are savaged by a strange couple. Years later one daughter is a famous author while her sister has never gotten over the attack and lives in the house with her mother. When her sister'shealth goes south she returns home as the past comes back to haunt them.

I don't knw what to say.

This is an incredibly violent and unpleasant film. The violence is real and visceral. Watching it isn't fun, but truly stomach churning. If you thought MARYTRS was brutal, this film is, in its way much worse. What sells the ugliness is the fact that the violence has a  cost with the characters carrying cuts, bruises and swelling from scene to scene as they would in real life.

And it's hard to say more becase there is a huge flip in the film about half way in. What happens colors the entire film after that. Actually it changes what you are seeing so as a result the film is really hard to discuss with anyone who hasn't seen it. Since I don't want to ruin anything I'm going to leave it there. (and god help you if you miss the flip)

Whether you will like this film or not is not for me to say. I do warn you that this is a very violent film and odds are it will push your buttons.