Apichatpong Weerasethakul's MEMORIA is a major miss. A long  rambling unexplained dream with a WTF moment in it produced interesting reactions in the audience I saw it with.
The film follows Jessica (Tilda Swinton) who is living in Columbia, working as a botanist, visiting her sick sister in the hospital and trying to figure out the weird banging sound she keeps hearing in her head.
The reality is this film is a weird dream where Swinton wanders through the landscape trying to get answers when she occasionally asks questions. Very little is said. What is said is often referencing things we don't know anything about. There are very long takes where nothing happens, we watch a man die and come back to life for no real reason. It is full of pregnant pauses and pretentious lines that are punctuated by an occasional loud bang or the sound of car alarms going off.
Weerasethakul and Swinton had been trying to put a project together for years and this is it... or rather it's part of it. Apparently so much material was shot that a book was put together that explains the missing material and acts as a behind the scenes guide for the film. How much material was cut out? I was told over 70% which means that roughly seven hours of additional scenes are missing. Its no wonder that the film makes no sense.(Think of it as a version of those old 8mm highlight versions of films that they used to sell before VHS. Those never made sense) It's so bad that a couple people after the screening were discussing how the Q&A made the film make more sense. Additionally both Dennis Lim and a woman I was talking to after the film said that the film was so much better the second time once you have read the book.
I need to read a 50 Euro book to understand a film? Really? In my world any film that needs an instruction manual is a failure. If a film can't stand on its own then there is something wrong with it. MEMORIA's need for a companion book instantly puts into the heap with films like WHITE WHITE WORLD, the bad bad film that played Tribeca a decade ago and required you to read the press notes so you could see the plot that the director had to cut out when he was editing his great looking film.
And don't get me wrong MEMORIA looks good. It also sounds great with one of the most aggressive soundtracks (in the right sort of ay) I've ever heard. The sound and image keep us watching even as the narrative completely disappears into the void.
Actually the soundtrack kept the audience awake with the occasional deafening bang making many in the audience leap out of their seats as they were awakened from their snoozing. I'm serious here, many were snoozing, or at least drifting off, their eyes closed and their heads tilted. And I know because how they jumped was something sdifferent than an audience leaping from a jump scare.
I also suspect the audience probably wasn't into the film when it ended because no one applauded. I've been to too many screenings with press conferences not to realize that some one almost always applauds unless it's a turkey. Additionally every audience will applaud a filmmaker and guests when they come out and the audience I saw the film with sat stone silent. I will not speculate as to their thoughts after the Q&A since Weerasethakul spent some of the time partially explaining what the film was supposed to be.
Again, what the film is as opposed to what it's supposed to be is the make or break point for me. This film had to be explained to a room full of writers who usually get what the director was getting at, and this time they didn't seem to. Even the "shh don't tell anyone WTF as that???" moment caused several people to ask questions concering it forcing Weerasethakul and Swinton to discuss it all the while saying to everyone don't mention it. (if you want to know what it is read some reviews or just watch the NYFF Q&A which is, or will be, on line.)
This truly is sound and fury signifying nothing. It is a Cliff Notes version of a longer project that doesn't do it justice. Honestly based on what I was told about the original long version of the film that was described by the filmmakers and the people who've read the book make me want to see that film, not this shortened version
A major miss. 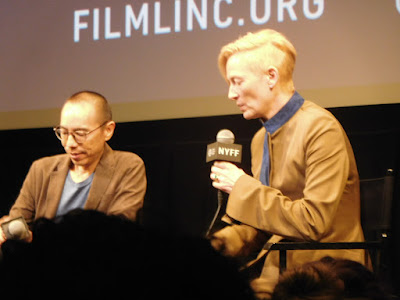