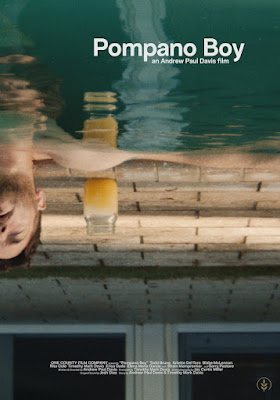 Andrew Paul Davis, who made the excellent PALACE returns with a change of pace drama about a minister going into a crisis.
POMPANO BOY is the story of Art. He is a minister  who was recently let go from his church for not strictly following the doctrine to the letter. As Art begins to start his own church, his wife Izzy gets  busier with her photography business. Additionally they take in Elijah as a foster child. If that wasn't complicated  enough Elijah's mother wants to tke him back, just as her old bad news boyfriend drifts into the picture.
It's sounds soapy but having watched similar familial gyrations among my friends this is positively simple. This is due to the sure hand of director Davis who keeps things moving and largely believable. We can feel for everyoneon screen and we understand why and how they are reacting the way they are. Truthfully out side of Ross, the bad news boyfriend, everyone feels real.
Having seen two films by Mr Davis I find that the best thing in his films are his characters. Davis gives us real people to watch. They are conflicted and hurting but not in your typical movie way. The pain and the conflicts are the way we in the audience feel. The move around their lives not in neat little tracks but in the same stumbling along way that we all do. In it's way it's a nifty trick because it forces us to continue watching since the film doesn't play out in your typical Hollywood way.
If you hate the sameness of Hollywood productions then you really need to take a look at POMPANO BOY.
POMPANO BOY screenings will be happening December 4 to the 14th. Details on locations and tickets can be found here
Posted by Steve Kopian at December 01, 2021